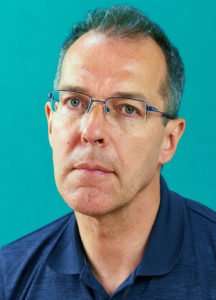 PAT BORAN was born in Portlaoise in the Irish midlands in 1963 and has long since lived in Dublin. He has held a number of positions as Writer-in-Residence, including with Dublin City Libraries and Dublin City University, as well as with the Western Education and Library Centre in Co. Fermanagh. He is a former Programme Director of the Dublin Writers Festival, a former presenter of both The Enchanted Way and The Poetry Programme on RTÉ Radio 1, and continues to contribute to a number of programmes on the station, including the highly popular Sunday Miscellany. He is also a former editor of Poetry Ireland Review.

Since receiving the Patrick Kavanagh Award for Poetry in 1989 he has published seven full-length collections of poetry. Those books are (in reverse order): Then Again (2019), Waveforms: Bull Island Haiku (2015) which includes a selection of the author’s photographs, The Next Life (2012), As the Hand, the Glove (2001), The Shape of Water (1996), Familiar Things (1993) and The Unwound Clock (1990). His New and Selected Poems, with an introduction by the late Dennis O’Driscoll, was first published in 2005. An updated version, A Man Is Only As Good: A Pocket Selected Poems, was published in 2017. His books have been translated into a number of languages, including Italian, Portuguese, Hungarian, Macedonian and Greek (forthcoming). 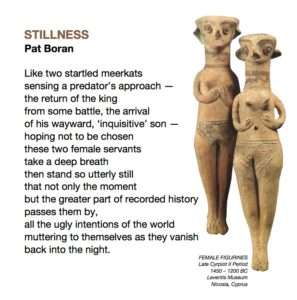 In addition to poetry he has published a collection of short stories, Strange Bedfellows (1991) and a short fiction title for children, All the Way from China (1999), a finalist for the Bisto Book of the Year Award. His non-fiction includes the humorous memoir, The Invisible Prison: Scenes from an Irish Childhood (2009), issued in Italian in 2019, the writers’ handbook The Portable Creative Writing Workshop (various editions) and A Short History of Dublin (2000).

He is a former editor of Poetry Ireland Review; for EXPO2000 he edited the literature and arts newspaper Portal distributed free to visitors to the Irish pavilion; and with Peter Sirr he co-edited Dublin 15, an audio CD of poems about the city, produced to mark his period as Writer-in-Residence with Dublin Corporation. At Dedalus Press, which he has directed for more than a decade, he has edited a large number of poetry publications: more than a hundred books by fellow poets and close to a dozen significant anthologies of Irish writing. Among these are Wingspan: A Dedalus Sampler (2006); Flowing, Still: Irish Poets on Irish Poetry (2009), a prose update to the Poetry Ireland anthology Watching the River Flow (Duffy & Dorgan, eds.); The Bee-LoudGlade (2009), which included an audio CD of poems set to music by Roger Gregg’s Crazy Dog Audio Theatre; Shine On, featuring some 50 Irish poets and fiction writers in support of those affected by mental ill-health (2011); Airborne: Poetry from Ireland (2012) on Apple’s iBooks platform; with Gerard Smyth the bestselling If Ever You Go: A Map of Dublin in Poetry and Song (2014), chosen as the Dublin One City, One Book title for that year; with Eugene O’Connell the poetry and prose anthology The Deep Heart’s Core: Irish Poets Revisit A Touchstone Poem (2017); with Chiamaka Enyi-Amadi Writing Home: The ‘New Irish’ Poets (2019) for which he also contributed the introduction; and in 2020 The Word Ark: A Pocket Book of Animal Poems, illustrated by Gaetano Tranchino, edited and prepared for press during lockdown. 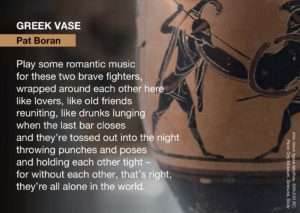 Pat Boran has conducted writing workshops throughout Ireland and has represented Ireland at poetry and literature festivals across Europe. Over the years he has received a number of Arts Council Bursaries and travel awards and has received both the Patrick Kavanagh Award for Poetry and the US-based Lawrence O’Shaughnessy Poetry Award.

Since 2015, and the publication of Waveforms: Bull Island Haiku, in which the poems are accompanied by the author’s own black and white photographs, he has been increasingly drawn to the possibilities presented by matching photographs and various other graphic forms with text, not only producing an ongoing series of PoemCards, but more recently exploring short poem-films.

Pat Boran is a member of Aosdána, the affiliation of creative artists in Ireland.